Surrey Heath Singers presented a double-bill on Saturday 7th December at The High Cross Church in Camberley for Christmas: a Schools Christmas Festival followed by a Christmas Concert “Follow that Star”.

The Schools Festival took place in the afternoon directed by Karen Phillips. Connaught, Ravenscote and South Camberley Schools joined together with a diverse programme that included traditional carols such as Silent Night and We Three Kings and more contemporary arrangements of seasonal numbers including The Twelve Days of Christmas, – familiar to all but impressively articulated by the school choirs. The latter was a joint presentation by all the schools who also sang Away in a Manger to touch the hearts of the audience of 150 parents. It was impressive that all the arrangements were sung from memory and the intonation was, as a consequence, clear and precise sounding more mature than the age group of primary Schools might suggest.

O Holy Night and A Perfect Winter Day were charming carols beautifully sung by Connaught School as were their opening carols, Lord, why Choose Me and Mary Did You Know, setting the scene and posing pertinent questions for the time of year.

Tell Me a Story, Shining Star and Holly Jolly Christmas were captivating for the verve and accuracy with which they were delivered by South Camberley.

As we wait for Christmas Day and Hope of Heaven were sung with feeling and conveyed the sense of waiting at Advent admirably well by Ravenscote. Their rendering of This Christmas Time made a hearty contrast and put us all in the mood for Christmas.

Before the final carol, The Twelve Days of Christmas, the Music Directors of the Schools; Mrs Summers, Mrs Canfield and Miss Stalley, sang the Peter Gritton arrangement of Follow that Star with The Surrey Heath singers.

The striving for high standards by the school choirs was balanced by obvious enjoyment by the children for the music and the enthusiasm of parents in the audience to join in with the collective Carols, Once in Royal David’s City and O Come All Ye Faithful.  Alternating performances between the schools gave the afternoon a joyous feeling, enhanced by Andrew Phillips Christmas narration between carols and the appearance of Father Christmas’ elves with presents at the end of the performance. The concert was part of a youth engagement programme by Surrey Heath Singers to encourage music in local schools. 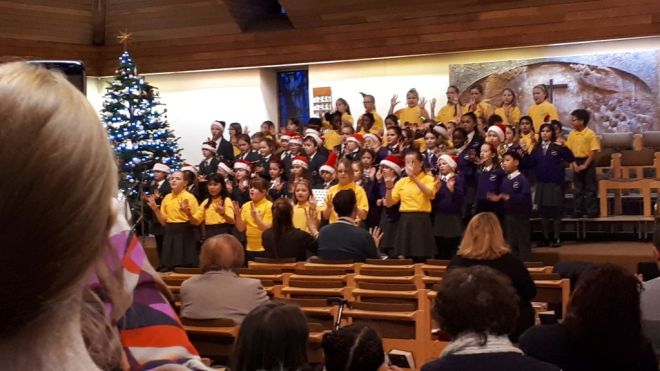 The evening Concert of “Follow that Star” with the full choir was conducted by Andrew Phillips, accompanied by Geoff Tuson on piano and organ.

After a rousing introduction of O Come All Ye Faithful, Surrey Heath Singers presented the now relatively traditional Rutter arrangements of Sans Day Carol followed by Jesus Child. Andy Phillips set the scene with the poem of Christmas by John Betjeman. Strident chords of Ave Rex by William Mathias startled the audience with a medieval carol sequence that recognised that A New Work is Come to Hand, There is No Rose of Such Virtue as Jesu and Sir Christemas message is welcome. This unconventional sequence made us all sit up and gave choir and audience a poignant sense of musical drama about the events of Christmas.

Zero Harmony, the Siemens Choir supported by Surrey Heath Singers presented the Mohr version of Stille Nacht in German and Rutter’s Star Carol which will also be performed at the Company’s headquarters in Frimley before Christmas. Readers from the choir read The Magic of Christmas by Tom Krause, and The Innkeepers Wife by Jane and Mark Lewis,

The second half of the concert started on a soothing tone with A Maiden Most Gentle, Away in A Manger and the 16th Century Carol Christmas Night arranged by John Rutter. Boisterous strains of popular Christmas numbers like Follow that Star and Winter Wonderland, arranged by Peter Gritton, ramped up the mood before Karen Phillips humorously entertained the audience with the poem about the human cost of making good on the promises of gifts in the Twelve Days of Christmas by John Julius Norwich.

Rocking performances of Just Another Star, Mary’s Boy Child and, finally, Santa Claus is Coming to Town ushered in the finale with well known but magical Gritton arrangements which charged up the audience for the final carol – Hark The Herald Angels.

This concert was both a celebration of the magic of Christmas music and of the diversity of musical arrangements that exist to explain the Christmas message. We were honoured to celebrate in the presence of our sponsors, Siemens and the Co-op. We look toward to continuing our engagement with schools In the coming year.

Singet, the a capella Group of Surrey Heath Singers, visited Hammond Junior School, Lightwater on Wednesday, 13th November 2019 to support their Assembly and give a workshop. Hammond School’s Director of Music, Robin Langdon, holds a musical Assembly every four weeks and is keen to introduce new approaches to music so that the years 3 and 4, numbering about 150, experience different possibilities for singing.

Singet, led by Crispin, with sopranos Pam, Madeleine and Sylvia, alto Peggy and Tenor Matthew joined in with a “feel good” chorus written by Robin. Then Singet presented the harmony version of The Jungle Book Bare Necessities arranged by Nicholas Hare. It was quite obvious from the reaction of the children that they were delighted to listen to the performance. We were asked for a reprise as the children left for their first lesson.

The workshop started with a very well-schooled group of about 25 children who responded with astonishing comprehension to warm-up exercises. The group moved on quickly to introduce a traditional Zulu song, Si Njay Njay Njay arranged by L‘Estrange and McSweeney. The obvious connotations of a Zulu warrior chant seemed to appeal to the children, although the meaning of the words is “Things are as they are because of prayer. Our ancestors – they used to pray”.

After several rounds of the Zulu chant which was repeated for the benefit of visiting parents, there was clearly an appetite for one more number. The Java Jive, as recorded by Manhattan Transfer completed the workshop with a perceptible appreciation from the children. A number of the children addressed questions to Singet without prompting about how we made music in that style and how long it took to achieve a capella singing showing that their interest had been kindled.

Delighted to announce that we will receive £233 from the Community Matters scheme at Waitrose in Bagshot. Such good news and huge thanks to everyone who kindly supported SHS.

Have a look at how well we have done with EasyFundRaising.

If you are not already supporting SHS with EasyFundRaising, please consider doing so.  Suppliers of goods and services (see some logos below), which you order online, will donate a small percentage of your spend to SHS.  Do you shop online at any of the online retailers below?  All you need to do is to join the scheme and then be sure to click through the EasyFundRaising link when placing your next order.

Look here to join up.

Covid-19 Update
We are meeting every Monday evening on Zoom.

We are hoping to hold a concert in Spring 2021.